Some people have the kind of lives that don’t require records. I have come to accept that I don’t have that life, so I need a strategy for dealing with all of the files, paper and electronic.

I have adopted a few strategies over the past 15 years or so that work most of the time. As long as I stick stuff in the folders. 🙂 When I need to find something, date seems the most reliable method and I can recall with good accuracy when something transpired.

For email, I use a month-year filing system. I have 12 folders per year, one for each month and I file 99% of emails by date.*

*For work, I have a few other folders: freelancers, orders/receipts and a folder for emails from my boss. I used to keep a “To read” folder, but now I read things straightaway and post them to Slack for the good of the team and for future reference.

For paper, I use monthly folders, too. One of the advantages of this method is at the end of every year, the files can go in a box and at the end of seven years, I can shred the contents of the box.

I create a new set of folders every year. I have a similar set at work.

For paper files, I do have additional folders for:

I have some other folders, too, but jury’s out on whether they are actually helpful.

Ready to organize those files?

You may be familiar with Marie Kondo’s The Life Changing of Magic of Tidying Up. I have read it and adopted some of her tips. It’s so much easier for me to part ways with things now and our t-shirt drawers are amazing. (If you haven’t read it, please read it before judging it–to do otherwise is so not cool.)

Very often when I read a self-help book, I look for the thing or things that I can integrate into my routine, the concept that improves life in some way. I am not fanatical about self-help books. For me, they are just tools in the tool box. And I need tools for tidying.

I have too much stuff. I have good ideas but sometimes like a Pinterest pin, things don’t go to plan. Sometimes I outgrow things (literally and figuratively). And Kondo’s suggestion to thank an item for its service and then to let it go is helpful when faced with an overflowing closet. I do have a generous heart and something that has really assuaged my guilt about acquiring so many things is a Ferengi concept, the Great Material Continuum. This is explained in Treachery, Faith and the Great River from season seven of Star Trek Deep Space Nine. (Get the complete series for less than $100–what a deal.) Basically it’s the idea that you have too much of a thing and not enough of something else while someone else needs what you have and another person has what you need. You put your excess out to the universe and you ask the universe for what you need. (Like Freecycle!)

As Nog says, you have to have faith in the Great Material Continuum.

We have been Netflix customers for more than 10 years. We started off as DVD-in-the-mail customers and then made the switch to digital. In the beginning, there wasn’t much to watch and admittedly I can go weeks without turning on the TV. But I have some recent favorites.

Like Sunday, Like Rain is a story about love and the inconvenience of love. I like stories about kids that let them have power and depth without being far-fetched.

Copenhagen starts in such a way that you loathe the main character. He is also transformed by a kid. This is also a story about the inconvenience of love and doing the right thing even after a lifetime of being wronged and doing the wrong thing.

The Beauty Inside is such a Korean filmmaker’s take on the Quantum Leap idea of jumping from body to body. (It was also a television series.) The loneliness and logistics of such a life do feel unbearable but I, the queen of happy endings, can tell you to hang in there until the end.

I also really loved the TV series Haven based on the Stephen King book The Colorado Kid which I also recommend. We listened to the audio book. The Maine accents took a little adjustment but it was something we looked forward to every time that we got in the car. Haven is a town plagued by “the troubles” and Nathan, Audrey and Duke are on a never-ending quest to help the troubled. Also Nathan and Audrey: epic love story.

Lost Girl is a supernatural drama about the world of the Fae.  Bo and Dyson, another epic love story. Bo and Kenzie are a different kind of love story, friends that rescue each other and become bonded at the heart.  It is extremely violent at times and I spent some portion with my hands over my eyes. But the story is captivating.

Limitless is based on a movie   It’s so sad that there is only one season of this. The main character, Brian, is a bit of a hapless dork with a crazy wardrobe who is transformed into a super computer with the help of NZT a brain enhancing drug.

Vampire Diaries: I initially bought the first season on DVD mistaking it for Vampire Academy (vampires in high school–you can see how it happened). I am a sucker for vampire stories–they are always the ultimate redemption stories. The last couple of seasons have been weird for me but I definitely recommend the first few. This is based on the books by LJ Smith. I couldn’t read the books after watching the series (some of the differences were disconcerting) but I did like Smith’s Night World books and I hope the promised 10th book will be published some day.

I am reading Hidden Figures  by Margot Lee Shetterly and looking forward to seeing the movie. It’s a fascinating account of African American women mathematicians working for Langley Research Center starting at the end of WWII. But it also makes me sad because just as these figures have been hidden from history, others have, too. It makes me grateful for writers and historians who bring these histories to light.

It’s especially good to have gardener friends who are handy with a camera. The photos on my blog are courtesy of my friend Darrel taken in his beautiful Arizona garden.

Darrel is a master propagator. He has a gift for making more plants and we both like the book by the same name. 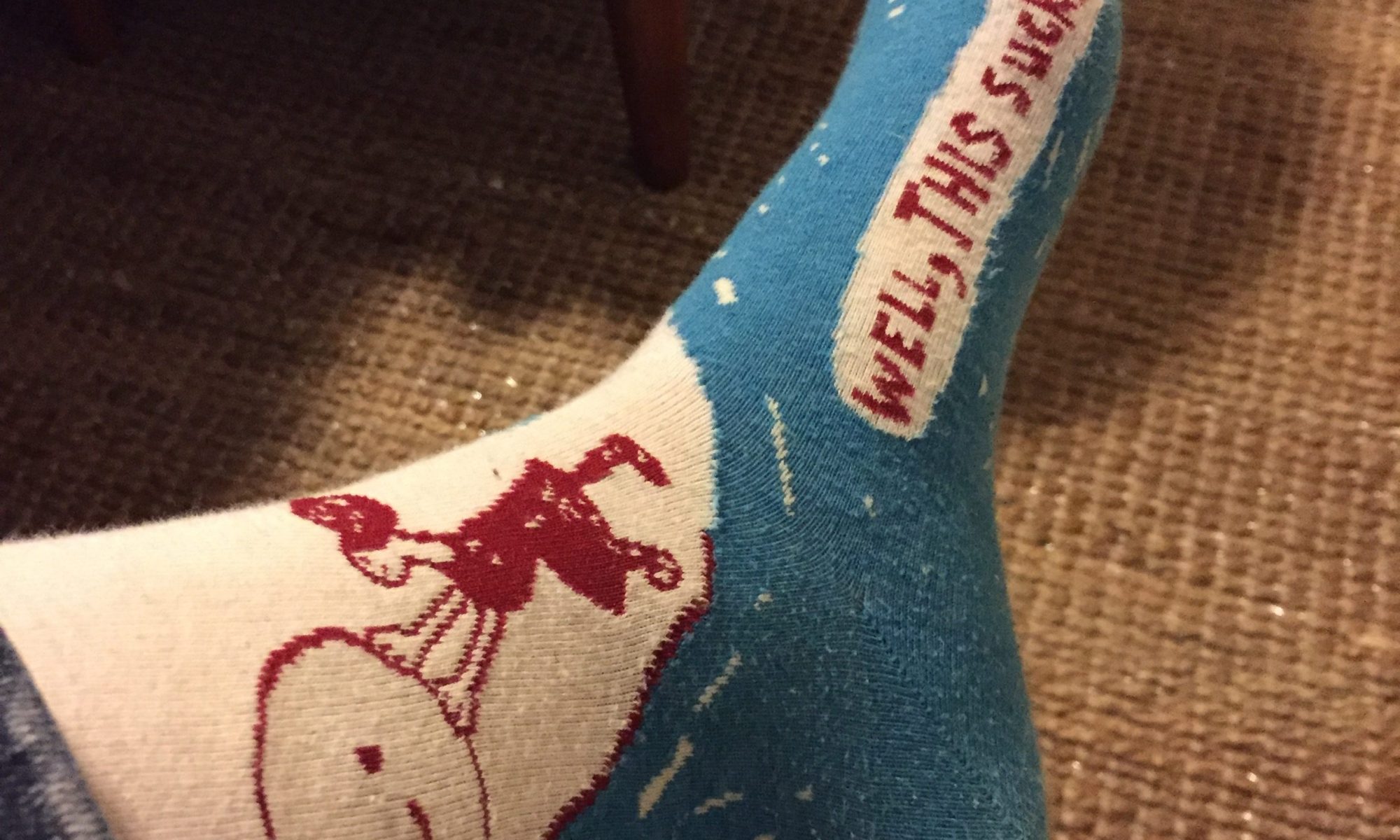 I love a little Greek mythology now and then, don’t you?

So my guy is Sisyphus. On more than one occasion, I have felt like my work is Sisyphean, or laborious and futile. I roll the boulder up the hill and  it rolls back down, hits me, and I need to start again. The new me is trying to think of these tasks not as a punishment but more of challenge. One that I can repeat à la Groundhog Day until one magical day I wake up and it’s not Groundhog Day anymore. In the GD scenario, it’s all about putting in effort and not worrying about the result. I can live with that.

But back to Sisyphus, my good friend Jane gifted me socks that rock, literally and figuratively, created by the magical people at Blue Q. Yes, I have Sisyphus socks. So perfect.

So if you see me smiling in a meeting, you’ll know why.

It’s a new year and a natural time for a reboot on my life. There’s nothing magical about New Year’s Day but it does feel like the world expects–and sometimes demands–a reckoning on this day.

So might as well take advantage of this break in the action to rearrange my metaphorical plants and find the right microclimates in my life.

I started off by sorting out my hosting and domain registration which I transferred a few months ago. My host was helpful and it was a short process to get up and running again. Whew! I love when I can check something off my list and there is no cursing involved.

Last week I read You Are a Badass by Jen Sincero. (I liked it so much that I bought the page a day calendar for daily inspiration.) It’s the first book in the mini book club that  I started with my husband. I need to be a better book club member–he finished it way before I did. There were many things I liked about the book but my three major takeaways are:

I have always had mixed feelings about the “love yourself” advice but not anymore. It is as if a switch was thrown in my brain and I finally understand. Loving yourself is exactly like the oxygen masks on an airplane. You have to put your own on before assisting others. There is no other way.

I hope that you will look in the mirror today and love what you see. What you are is perfect right now. The universe has delivered you and me to this point in time and who are we to argue with the universe. All is as it should be.

Last week, I learned that Gary Hausladen passed away. Gary was one of my geography professors at the University of Nevada. One of our colleagues described him as the quintessential geography professor. I’ve been thinking about what to say to honor Gary. He is one of those people who played a key role in my life–he smoothed the way for me to attend graduate school. He helped remove obstacles that might have prevented me from pursuing my degree. And he provided encouragement when I really, really needed it. For that, I will be forever grateful.

Gary, I will miss you. I wish I could hug you one last time, but I am glad I hugged you twice the last time that I saw you.

I will re-read Western Places, American Myths: How We Think About The West and think of you.

Thank you for being my teacher.